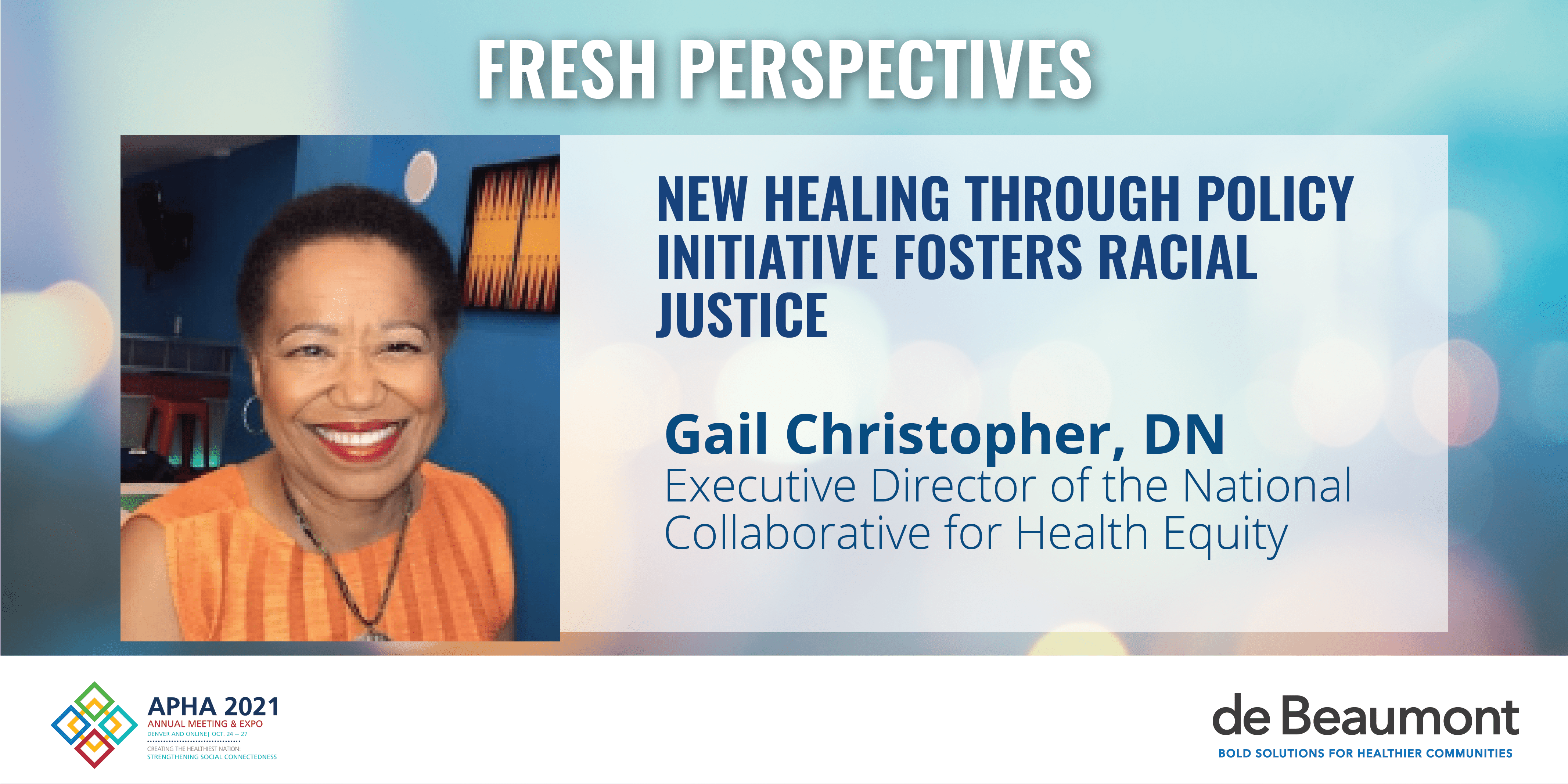 This article is the third the 2021 Fresh Perspectives series, presented by the de Beaumont Foundation. Published in the weeks leading up to APHA’s 2021 Annual Meeting and Expo in October, the series showcases viewpoints from a range of public health professionals around social connectedness.

Healing Through Policy: Creating Pathways to Racial Justice is a new initiative from APHA, the de Beaumont Foundation and the National Collaborative for Health Equity. Based on W.K. Kellogg’s Truth, Racial Healing & Transformation framework, the initiative includes a new set of policy papers that local leaders can use to promote racial healing and advance racial equity in their communities. Gail Christopher, DN, executive director of the National Collaborative for Health Equity, spoke with us about the initiative.

What makes this initiative unique?

It’s that the people who are experiencing the harm and the effects of systemic racism have really come up with the solutions. What we did was curate their solutions.

There’s just a whole panoply of opportunities that have emerged through coalitions, often led by the people that are harmed the most. But we need to take these policies and these practices and help them become scaled and become an even greater national movement.

What are the common threads of successful implementation of these policies and practices throughout the U.S.?

The other thing, though, is how are we defining community? Right at the heart of this work is the understanding that in a democracy, you need to have a broad swath of public will. You need a diverse coalition that can stand behind the proposed activity. Building bridges is core, it’s central. And where there’s been the greatest success that has any potential for being sustained, you have built bridges.

Another criterion or hallmark for the potential of success is that the wider the circle of engagement, the more you can find commonality and common interest, despite what might appear to be superficial differences. I think those are the communities that are able to actually pass something in terms of their local legislatures and sustain it. They also commit to processes for building bridges and solidifying relationships across political, across racial, across even gender lines and generational lines.

Why is healing integral to this initiative and to racial justice work overall?

Some people ask me, “Why healing? Why not justice?” And I say, “Well, it’s really a false dichotomy.” It’s not either-or. It’s both-and. But in order for you to sustain our efforts at maintaining justice, you have to have enough people who want it, who are willing to stand up for it, because they understand, and at a heart level, they believe it’s the right thing to do. That’s part of the rationale for healing.

The other part is, we’ve got to acknowledge how much harm is done by living in a society that devalues some people based on their physical characteristics, and we can break that down to a molecular, a cellular, an organelle, a systems level.

The exposure to being devalued as a human being, and the stress and the physiological reactions that they trigger affect the immune system. They affect the cardiovascular system, they affect the nervous system. This whole panoply of chronic disease, whether it’s obesity or high blood pressure — all of it can be traced back to this constant flood of hormones that are triggered by the stress responses to adversity. So any way you look at this, either from a societal level or an individual level, healing is required.

What do you hope Annual Meeting attendees learn from Healing Through Policy?

One of the things we’re doing is amplifying the voice of leaders in public health who have asserted that racism is a public health crisis. We now have over 200 jurisdictions where this has been codified into some sort of formal declaration. Public health tells us we have to have ways to both measure and monitor the extent of the crisis, and we also have to have ways of mobilizing interventions that will be of benefit to the total community.

This suite of suggested policies brings suggested ways to monitor and track and be accountable for the extent, depth and nuances of the crisis. And then very specific recommendations for actions. What I’m hoping we’re offering and people will embrace is a way to pull that thread from the declaration to the action. And in there is the accountability for impact.

Also, I think it’s very important to recognize the intention. So often, when we’ve attempted to deal with equity, we have not been explicit about racism and racial hierarchy at the core of the inequities. One of the things I’m most excited about with this effort is that it is explicit. We’re  naming structural racism and lifting up work by communities to deal with it.

Participants in APHA’s 2021 Annual Meeting and Expo can learn more about the Healing Through Policy: Creating Pathways to Racial Justice initiative at virtual session 3011 on Monday, Oct. 25. An interactive workshop later that day, session 2060, will guide attendees in discussions on racism as a public health crisis and share strategies for action.