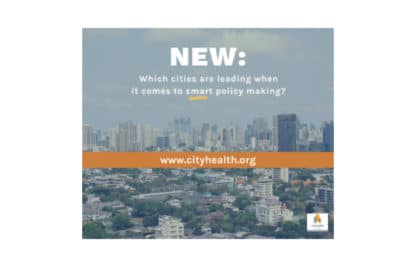 A majority of the largest U.S. cities now are demonstrating leadership when it comes to adopting policies that improve the health and well-being of their residents, according to the CityHealth initiative’s updated city ratings. But others lag when it comes to smart policymaking. View the report and the city ratings.

CityHealth, an initiative of the de Beaumont Foundation and Kaiser Permanente, offers a close look at whether the nation’s 40 largest cities have nine key policies in place that experts say help residents lead healthier lives and make communities thrive. CityHealth awarded each city a gold, silver, bronze, or no medal, according to their performance in the assessment. The group also awarded nine policy-specific medals to each city, according to the quality and strength of the laws in place, which address affordable housing, safe streets, and food safety, among other issues.

The report is designed to show which cities are leading the way on policies shown to improve people’s health and quality of life. CityHealth found in just one year, cities earned a total of 24 new medals for implementing proven policies to better the lives of the people who live, play, learn, and work in their jurisdictions. These advances meant that 10 cities — a quarter of the nation’s 40 largest cities — improved their overall medal status.

As a result, for the first time, a majority of the cities—25 cities total—earned a gold, silver, or bronze medal. Five cities (Boston, Chicago, New York, Los Angeles, and San Jose) earned a gold medal overall, demonstrating that those cities’ leaders have used powerful policy tools to enhance their city’s health, well-being, and economic vitality. Nine cities earned an overall silver medal, and 11 cities earned an overall bronze medal. Last year, only 19 out of 40 of the largest cities medaled. Each city’s medal status is noted below.

“Policy is a powerful lever for boosting health at the city level,” said Dr. Shelley Hearne, CityHealth’s president. “Many cities are demonstrating significant progress across nine pragmatic polices, which have been proven to help millions of people live longer, better lives. Still, too many cities are not getting to gold. We encourage all cities to show their commitment to building a healthier community that truly thrives, by adopting this set of proven policies. Every unearned gold medal represents an opportunity to take action and to improve people’s quality of life.”

While many cities made positive changes, others remain unchanged: Fifteen cities did not earn an overall medal, meaning they were awarded three or fewer medals across each of the nine policies. And four of the nation’s most populous cities (noted below) did not earn a medal for smoke-free indoor air policies, missing a significant opportunity to protect non-smokers from secondhand smoke and reduce smokers’ use of tobacco – the leading cause of preventable death in the U.S.

CityHealth’s nine evidence-based policies address ways that cities can improve the health of their residents in areas of everyday life – from the workplace and school, to housing and public transportation. Each policy is backed by evidence, supported by experts, and has a track record of bipartisan support. In addition to the medal ratings, CityHealth is available to provide technical assistance and support to cities as they advance these policies.