At the launch of the autumn flu season and amid a rash of weather-related disasters affecting many states, almost nine in 10 registered voters (89 percent) believe public health departments play an important role in the health of their community, according to a new poll released today by the de Beaumont Foundation.

Conducted by Public Opinion Strategies, the poll found that two-thirds of Americans believe state government should ensure that every community has access to basic public health protections, including:

A majority of voters (57%) said they would pay more in taxes to ensure access to these basic public health protections. 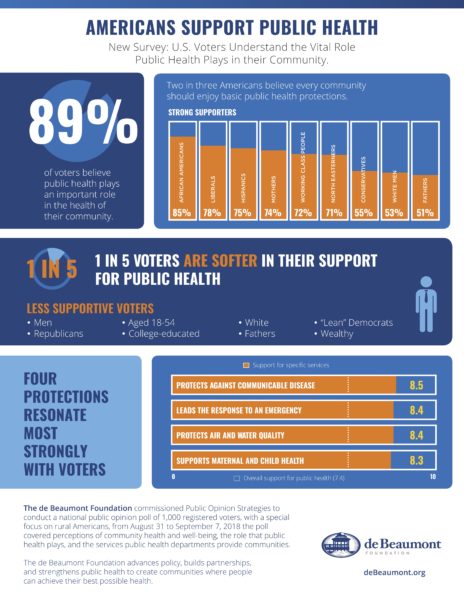 “Americans overwhelmingly value the protections public health departments deliver and want to ensure that every community has them,” said Brian C. Castrucci, DrPH, MA, chief executive officer of the de Beaumont Foundation. “While Americans seem divided on so many issues this election year, they are united in their support for public health because they understand the vital role it plays in their communities.”

The poll highlights opportunities to broaden support for public health, by demonstrating the value of public service departments to voters who expressed support with less intensity than other groups — including high-income voters and men who self-identified as Republicans, age 18 to 54, college-educated, white, fathers, or lean Democrats.