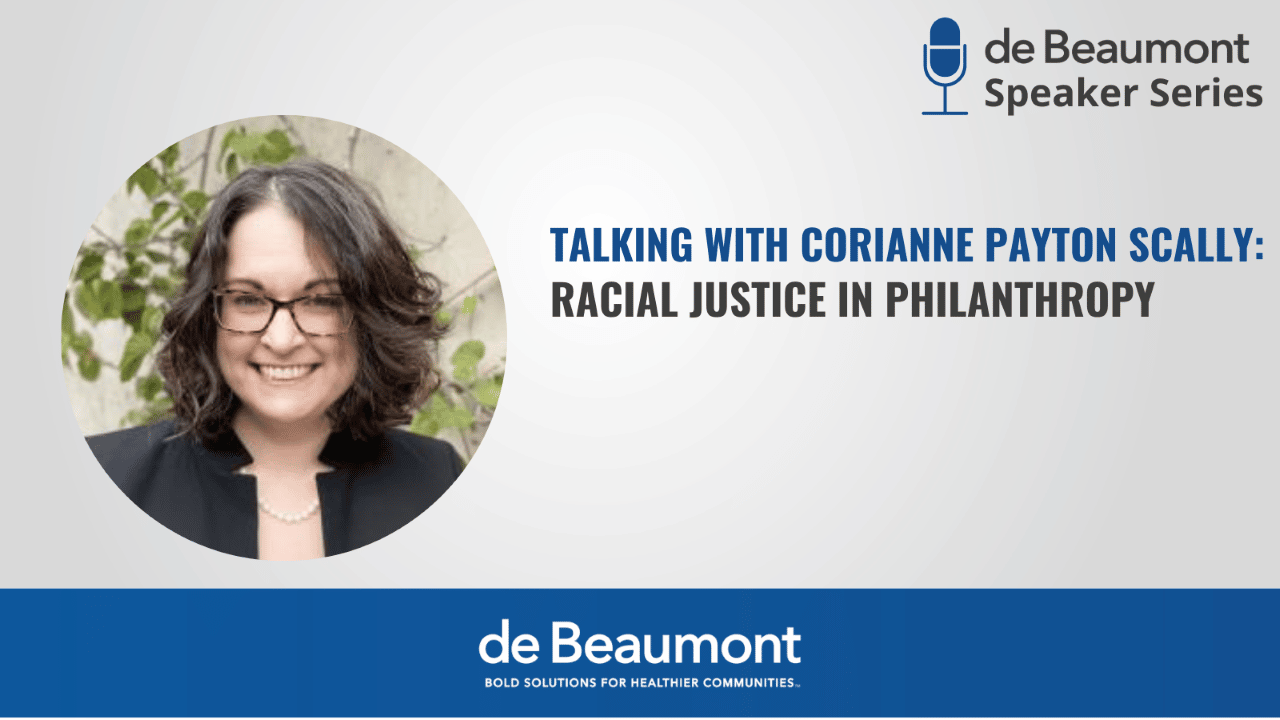 Philanthropic leaders are having a reckoning. In a field of characterized by immense privilege and power, funders are increasingly seeking to redress past and current harms in their sector and to pursue more equitable relationships with grantees and the communities they serve.

“Historically, funders, including both philanthropy and government, have devalued the experience and opinions of communities of color,” said Corianne Payton Scally, PhD, senior fellow in the Metropolitan Housing and Communities Policy Center at the Urban Institute, during a de Beaumont Foundation Speaker Series event. “However, they can use their power for good, influencing systems by sharing power and resources with those people who are most harmed by racist systems.”

(Funders) can use their power for good, influencing systems by sharing power and resources with those people who are most harmed by racist systems.

Whether through initiatives related to housing, food access, or environmental protection, funders can deepen their commitments through supporting place-based systems change and racial justice.

Scally outlined the following characteristics of funders who choose to center racial justice in their work:

Centering racial justice requires funders to take risks for the benefit of communities, often going against the status quo in philanthropy.

Scally provided four ways that funders can be risk-takers in the name of racial justice:

To dismantle structural racism, funders need to build capacity — within their organizations and across partners, Scally noted. “This means recognizing distinct but overlapping journeys toward deeper racial justice and trying to help everyone further down the path that they are traveling,” she said.

They are deeply accountable to communities.

Too often, powerful entities will enter communities without attempting to understand the history of the places in which they are investing. They force decisions on communities instead of respecting the power that communities already possess.

“Funders can help build momentum in a place where current initiatives are building on past infrastructures of trust and investment, and that can be part of understanding the history of a place and what other types of work have been done with the community there,” Scally said.

Funders need to build meaningful relationships with community members and elevate the voices of grantees. One way that funders can do this is by having people most impacted by the issue at hand serve as the majority representation in decision-making bodies.

In addition to being accountable to communities, funders who center racial justice pursue mutual accountability with their grantees.

They commit to and use their power to “reach over and up.”

Funders that “reach over and up” leverage their influence, means, and other forms of power to make meaningful commitments to grantees.

These commitments fall into four categories:

Reputation: A funder’s reputation can go a long way toward supporting place-based systems change and racial justice. Well-regarded funders are able to use their reputation to attract partners and bring greater attention to initiatives. Another way that grantees benefit from their funders’ reputation is through political cover, Scally explained. A funder with a strong reputation can protect and support grantees who speak candidly about racial justice.

Resources: While financial investments are among the most important resources that a funder can possess and leverage, resources like social capital and information are also valuable assets in a partnership. Transferring such resources and knowledge to grantees and communities is part of this commitment as well.

Technical Capacity: The technical capacity of an organization is critical to the long-term sustainability of initiatives, Scally said. “Bringing and leaving behind new knowledge and skills can help further community goals over the long term, even if your engagement is just for a handful of years.”

Reach: Funders’ wide reach allows them to connect with other influential people, funders, and groups beyond their initiatives. Reach also involves evaluation and sharing results from initiatives to amplify the positive work being done in communities.

For more information on place-based systems change and racial justice, see the following resources provided by Corianne Payton Scally in her presentation: