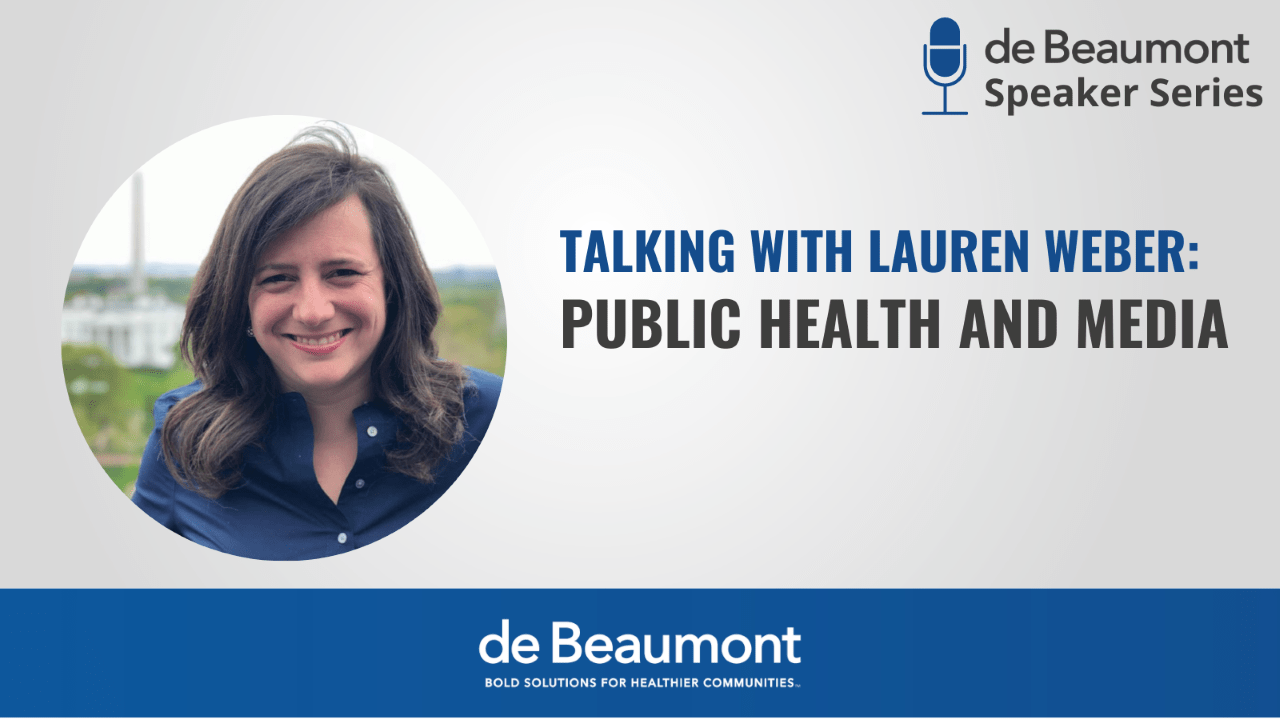 For as long as Lauren Weber has been covering public health, nothing has compared to the experience of being a journalist during the COVID-19 pandemic.

“Covering the pandemic is like the Super Bowl of public health reporting,” the Midwest correspondent for Kaiser Health News told de Beaumont staff during a recent discussion. Weber has reported on topics ranging from government health programs to rare disease, but “no public health issue that I’ve ever written about has so captivated the entire country” like the pandemic, she said.

Weber and her colleagues have spent the past year covering the effects of the pandemic on both the public health workforce and communities, including in the award-winning series from Kaiser Health News and the Associated Press, “Underfunded And Under Threat.” Among the key takeaways familiar to public health professionals: a shrinking workforce, insufficient funding, and job-related stressors.

“What our whole ‘Underfunded And Under Threat’ series showed is that people don’t consider public health workers the pandemic heroes,” she said. “They don’t know what public health is doing. They don’t have an understanding of it…and then they blame [practitioners] for all the bad things.”

Weber noted that the perception of public health as a “nanny state” underlies this vitriol. “Nobody likes being told what to do,” she said, “and I think that sometimes can also hamper public health’s likability in a way, which makes it more difficult…to cover and understand.” Not only that, Weber said, but “in this pandemic, public health has been just utterly brutalized by leaders at a national, state, and local level.”

As “Underfunded And Under Threat” illuminates, the pandemic has worsened long-standing challenges in the public health system. But now that public health is in the spotlight, Weber said, practitioners can seize this moment to engage the news media, bolstering voices from the field and keeping public health in discourse long after the pandemic.

Although public health agencies have been stretched thin, media engagement is worth the effort over the long term for practitioners. “Media does oftentimes…drive understanding, and it’s a way to communicate with the public to get across what you’re looking to accomplish,” Weber said. It may take some effort to get comfortable working with media, but doing so can benefit health departments and the overall public health field.

With more reporters wading into public health coverage as a result of the pandemic, it’s even more important for practitioners to discuss their work in ways that most people can comprehend — an ongoing challenge in public health communications. “In general, prevention, which public health is founded upon, is a concept that [few] people wrap their heads around very readily,” Weber said. “It’s harder to measure prevention. It’s harder to say that if you spend money now, you’ll save money later.”

Public health professionals make the case for their field by explaining the consequences of a nation without prevention, with the pandemic as one example. Weber noted that “getting down to the brass tacks of what that means is helpful for reporters because you’re showing the cause and effect.”

One way that the pandemic has underscored both the importance and relevance of public health is by placing a renewed focus on health equity. “I do think there is a lot more grappling right now in the media with social and economic inequities, and I think that so much of public health is grappling with those on a day-to-day basis,” Weber said. As social justice movements swell, public health practitioners have an opportunity to voice their dedication to health equity and its implications for population health.

The pandemic has also created an opening for practitioners to link their work to areas of media coverage beyond conventional health topics, such as politics, business, and transportation, Weber said. Finding a relevant angle for reporters in these beats allows public health professionals to show how what they do intersects with people’s lives every day.

In addition, public health professionals can elevate their workforce by referring journalists to those who are underrepresented in media. Often in news stories about public health, practitioners working on the ground aren’t the ones quoted. Public health professionals have a role in connecting journalists to their colleagues with lived experiences and who come from diverse backgrounds, Weber said. She added that the media narrative of public health may look the way it does in part because these people aren’t being contacted for interviews.

To ensure they’re heard, practitioners and experts need to be on journalists’ radars early on. Weber recommends that public health professionals forge relationships with reporters before crises occur. It’s incumbent on practitioners “to build that relationship, much like you do with other community members or leaders or parts that make the society work, before deadline,” she said.