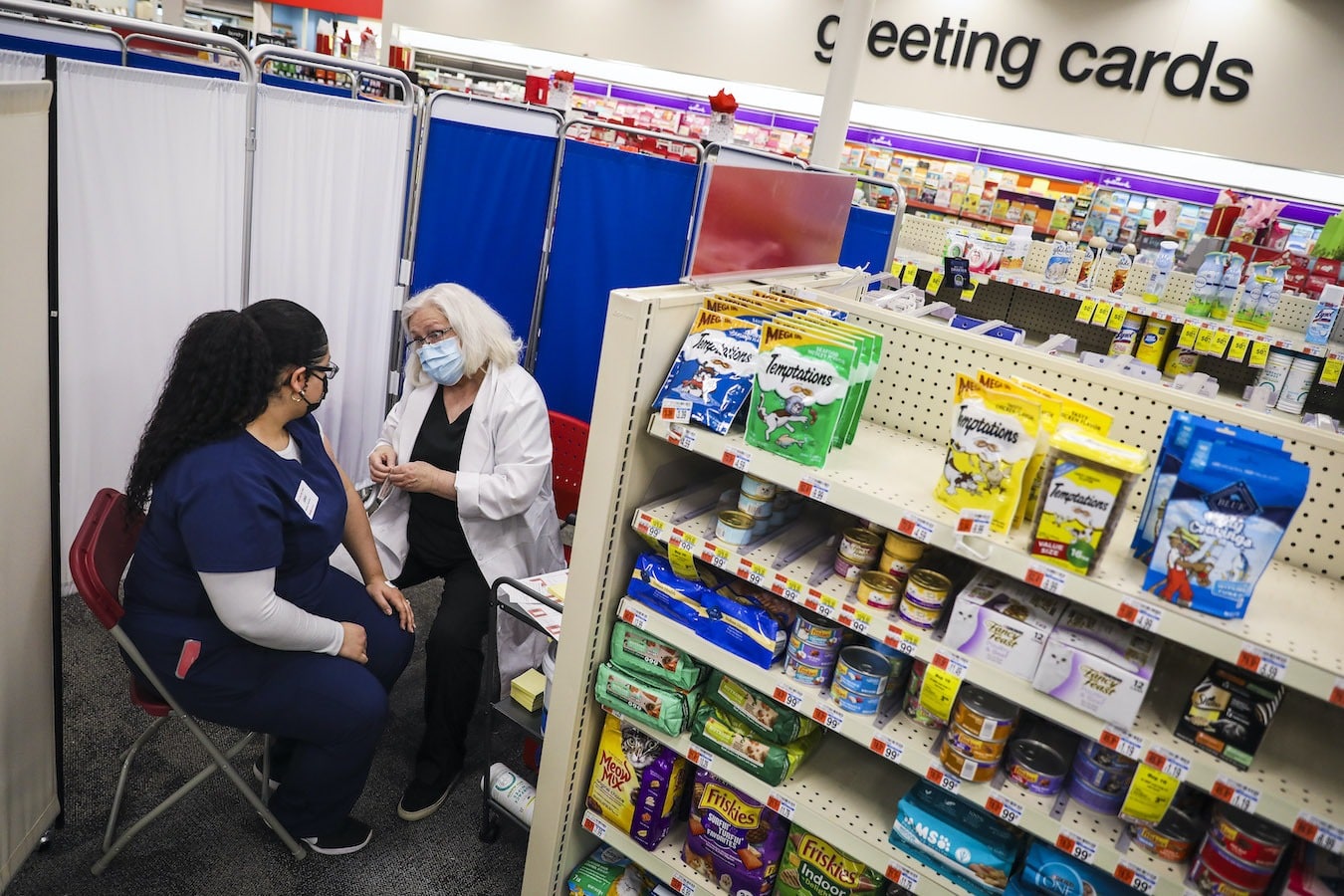 CVS Pharmacy Technician Leslie Carnejo, left, talks to RN Claire Karas after receiving the COVID-19 vaccine at a CVS in Boston. CVS Health, which administers covid vaccines as part of the federal pharmacy distribution program, says it strongly encourages the shots for its employees “from a public health standpoint” but won’t mandate them. (Erin Clark / The Boston Globe via Getty Images)

Many of the companies with the largest number of employees say they’ll do almost anything to encourage their employees to get vaccinated. But a survey of some of them found that none would be inclined to mandate shots as a condition for holding a job.

Almost all 15 companies surveyed — among the largest and most influential Fortune 500 companies — have strong pro-vaccine messages from their corporate leadership, emphasizing that the shots can both help protect individuals and bring the pandemic to a close.

CVS Health, which administers covid vaccines as part of the federal pharmacy distribution program, says it strongly encourages the shots for its employees “from a public health standpoint” but won’t mandate them. Starbucks is also encouraging the shots “to help mitigate the spread of COVID-19,” but also doesn’t mandate them.

Some companies are giving employees paid time off to either get shots or stay home if they have side effects, a trend that could increase now that the Biden administration has announced tax credits for smaller companies to offer up to 80 hours of paid sick leave until Sept. 30.

Target is giving hourly employees up to four additional hours of pay if they get the vaccine (two hours per shot). Amazon is offering $40 a shot for hourly workers, and Kroger is giving employees $100 if they receive both doses.

“Vaccination, in our view, is absolutely the only way out of the pandemic, both for us to get to normalcy and also for the country,” said Dr. Vin Gupta, a pulmonologist and chief medical officer for Amazon’s covid response.

Amazon, like other large retailers, has experienced covid outbreaks at its workplaces throughout the pandemic. In October it revealed that nearly 20,000 out of the company’s 1.37 million frontline employees had tested positive or were presumed to have been infected with the covid virus.

The company, which includes Whole Foods Market, distribution warehouses and data centers, has organized vaccination events for employees such as delivery workers in at least 29 states, and is among the giant companies doing the most to bring shots to its workers. But for now, Amazon isn’t making vaccines mandatory.

Target, the only company among those surveyed that is offering financial incentives, extra paid time off and vaccinations at the worksite, has no plans to mandate the vaccinations.

However, the pandemic has brought a stream of fast-changing policies and recommendations from federal health authorities, and some companies, while declining mandates for now, indicated that could change.

“I don’t have a crystal ball, and I can’t predict the future, but that’s what our message is now,” said Carrie Altieri, vice president of communications for covid strategy at IBM.

Legal and public health experts caution against any mandates before the Food and Drug Administration fully licenses the shots, which could happen this summer. The vaccines were authorized by the FDA for “emergency use” and as such employers can’t require them, some legal experts have argued. Even post-licensure, though, companies could spark a backlash if they require employees to get them, said Joanne Rosen, senior lecturer and associate director at the Center for Law and the Public’s Health at Johns Hopkins University.

A mandate could anger certain employees while only marginally increasing the number of vaccinations, Rosen and others say. It would be more prudent to focus on “carrots instead of sticks,” she said.

“If the purpose of a mandate is to ensure that the largest number of people get vaccinated, a backlash to a mandate, in which you have more reluctance or opposition to vaccination, is the opposite of the outcome you want to get,” she said.

Post-licensure, employers would face fewer legal challenges to vaccine mandates, especially if staff members work with medically vulnerable or at-risk patients, as in nursing homes or prisons. Aside from these special sectors, employee mandates aren’t necessarily a good idea from a public health perspective, said Michelle Mello, a professor of law and medicine at Stanford University.

Hard-line vaccine opponents likely wouldn’t be swayed by an employment-based vaccine requirement, and it could risk alienating some in the “wait and see” contingent, she said.

About 6% of Americans not yet vaccinated against covid said they would accept a shot if it was required, according to an April survey from KFF. An additional 15% who hadn’t gotten a shot expressed a “wait and see” attitude toward vaccination. And 13% flatly refused to be vaccinated.

Gains in the small group who say they’d get a shot if it’s required might not be worth the uproar a mandate could foment, Mello said.

Polling conducted by de Beaumont and GOP pollster Frank Luntz on April 15 found that 36% of those who voted for Donald Trump in the 2020 presidential election agreed it was important for American businesses to encourage and incentivize the vaccines, versus 54% of Joe Biden voters. The survey also found that 41% of Trump voters believed that businesses should not be involved in covid vaccinations at all, compared with 18% of Biden voters.

“Mandating vaccination will hit every button there is on the political right,” Castrucci said.

Once public health tools and strategies become politicized, local governments can choose to simply take them off the table as an option. A new Florida law bans businesses and government entities from requiring proof of a covid vaccination. The law builds on Gov. Ron DeSantis’ executive order, which he signed April 2.

“Vaccine verification can be a useful tool,” Castrucci said. “Now it’s no longer available in Florida.”

Despite the potential backlash, the financial case for covid vaccinations is clear, said Aaron Yelowitz, an economics professor at the University of Kentucky, given how effective the shots are.

Taking into account the costs of a shortened life span, mental health conditions and lost income due to illness and shutdowns, the covid pandemic has cost the average American family of four almost $200,000, according to an analysis by researchers at Harvard.

Some of these costs may be borne by businesses in the form of lost productivity and higher health insurance prices, said Yelowitz. Financial incentives for the shots are thus an extremely tempting trade-off, he said.

Incentives for vaccination — like a $25 gift card or free Uber ride — are “surely worth it in terms of savings,” Yelowitz said. In the same vein, he also called Ohio Gov. Mike DeWine’s $5 million vaccine lottery “innovative and imaginative.”

But for now, employers are sensitive about what they can and can’t demand of workers, said Lindsey Leininger, a clinical professor of business administration at Dartmouth College. The tight labor market and the fraught, ongoing negotiations over when and how to bring employees back to the office makes some companies wary of asking too much of their workers, said Leininger, who advises smaller businesses on covid vaccines and other issues.

“All of the businesses I work with have a general preference for carrot versus stick types of approaches,” she said. “How many things do you want to mandate of your employees right now?”

KHN (Kaiser Health News) is a national newsroom that produces in-depth journalism about health issues. Together with Policy Analysis and Polling, KHN is one of the three major operating programs at KFF (Kaiser Family Foundation). KFF is an endowed nonprofit organization providing information on health issues to the nation.

This story can be republished for free (details).